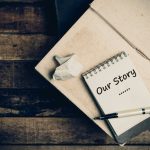 I have to confess; I really did not listen to my head at all.  When I saw the cottage; I fell in love there and then.

There was something about the Virginia creeper that crept obsessively over the front of the house framing small windows, shading the front door, cradling it from harm.   The way the sun fell to one side and the grotesque shadows played across the side garden, half the house stayed in the shade whereas the other was bathed in glorious contrasting light.

I still remember the feeling as I got out of the car.  The sweet citrus smell of the already flowering magnolia cloying my nostrils.  I peered through the arched gate and up the tiny broken path.  The house was so concealed that you could not see it till you stood on the path and then the whole house smiled its deceptive welcome.

Up until that point, I had hardly noticed being part of life.  The pain of thinking and particularly remembering was just too much to bear.  As I stepped through that arch, I had felt something. Was it fear? I was not aware at first, but the numbness was dulled. Butterflies flitted round my stomach, dancing a fast and furious salsa.  My heart was beating, and even I could hear the quickness of breath.  I realised at that moment that I was still alive.  I knew I owed it to Carl and Tiffany to try to rebuild my life.

“I’ll take it” I had told the bewildered agent there and then, with the smell of sea air brushing round me and the taste of salt on my tongue.  It had been a while since I could taste anything.  The gulls down on the beach were swooping high in the air screeching warnings loudly to each other as they soared closer over the cottage.

“but you need to look inside.” He was young, in his recently acquired jacket and particularly polished shoes.  “What about the quaint kitchen leading to the basement utility room and the beautifully appointed en-suite to the …”

“Its ok I will take it.  How long a lease will they allow me?  I definitely want it all summer do you think they will grant me a full year?” It was probably a bit rude of me to cut him off in his newly learned patter.

“I don’t know,”  he flitted through his sheaf of papers, leaning from one foot to the other “shall we go to the back garden, you just have to see the view and I need to show you where the cliff drops to the…..”

“It’s fine” I had told him.  My face even managed to crack a small smile.  Oh I remember the effort and the pain of doing so, but the effect had been a lightening inside me.  It was as if, that saying you know the one; ‘a weight was truly lifted that day from my shoulders’.

I could not understand what was happening.  What was important on that day, was that I could feel again and it was Damascus Rose Cottage that had opened my eyes or rather my heart.

This entry was posted in Story Snippets. Bookmark the permalink.
Click here to cancel reply.