It was only five minutes ago I was waddling around rushing to complete my Christmas shopping way too early, for me at any rate.   We went out on the Saturday in Sexy Sporty Dad’s little spitfire and traversed the countryside finally finding what I was looking for in the town only miles from where we were living. It was a pair of leather driving gloves for my brother.

As we reached home a friend rung to say her digs had been burgled and she didn’t know how to change the lock.  Selflessly as ever Sexy Sporty Dad got back into the spitfire and we drove back to town.

That night, 10 glorious days before he was due No 1 Son made his debut onto the world’s stage.  Well not quite that night; 2 days of hard labour for his mother.  At least he wasn’t 10 days late and arrive on Christmas day as people had warned me, first babies had a habit of doing. 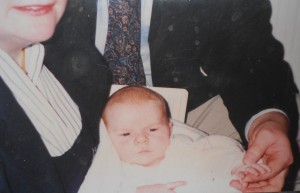 I remember in minute detail, the movements of that day and week 16 years ago, as yet again we find ourselves celebrating the events of that weekend.  That tiny little thing, who would only open one eye at a time to peer round taking this new wondrous world in, is now taller than me, plays rugby, is about to finish school, he thinks and is; he informs me allowed to buy a lottery ticket.

I have been buying them since before he was born and my numbers are still waiting to come up, so if he can do better; then give it a try but remember whose £1 it was first.

Buying birthday presents for 16-year-old boys is not an easy task; the moped he was desperate for had been consigned to another list, if not the bin.  Thankfully he has listened to my comments about tax, insurance and petrol.  Persuaded against the moped, by his safety conscious mother he asked for a SLR camera.

A learning curve in camera lingo ensued as I trawled the internet for a suitable present.  I found one on Amazon that matched all our requirements except the price band. If we gave him a joint birthday and Christmas present, a practice I have avoided for 16 years, we could nearly justify the cost.

The new Canon EOS has been launched and this company were selling off their old style, said the blurb.  We would never afford the new one but could stretch for this one, it had all that a 16-year-old boy would need including interchangeable lenses that he could buy more of as he understood the camera better and earned his own money.

We bought and paid for the camera, sat back with smiles upon our faces pleased that we had sorted his present in such good time.

The camera duly arrived in a box I could only just manage to carry sideways through the door of the post office.   We hid it with all the excitement and trepidation of a toddler waiting for Christmas, until all was quiet in the house and we were able slowly to open the package.  Inside was a Nikon camera case.   Not what we were expecting.  We looked at each other, surely we had bought Canon.  Delving further inside the case was a Canon EOS carefully wrapped in bubble wrap and a lens also wrapped in bubble wrap.  No leads, no instructions, no memory card to get him started.     We were holding; not new, but a second-hand camera.

Back onto the website I could not find the complete advert but under my recent transactions the description definitely says condition: new.  To me I understand new to mean unused, in the original packaging together with instruction manual and guarantee.

Sexy Sporty Dad had found a delivery note.   It said this is a nearly new item and the lenses are very new and fabulous.

A very strongly worded email was sent via the Amazon web site to the seller and to Amazon themselves who replied within a few hours, apologising that one of their market sellers had upset me.   Could I allow her 3 days, then if I was not happy they would file a claim.

We are now awaiting the outcome of the claim.  The seller did send a very curt reply after Amazon had filed the claim against her; stating that had it been a new camera we would have had to pay more but it was with regret she had sold it at that prix.   No refund would be given as the lenses had hardly been used.

No 1 Son had to make do with a few rushed pressies I was able to pick up at the supermarket to celebrate.   He is now of the age where he can understand what is happening and he has picked out a camera he quite likes when the claim comes through.  I am fairly confident we will win as Amazon have agreed with us that new means what I understand it to mean; unused.  Also if they lost me as a customer I expect the whole e-commerce market would collapse into an irrecoverable recession.

Now that the birthday is out-of-the-way we will be permitted to begin preparing for the Christmas festivities.   We will be looking for a Christmas tree this weekend, a new one not previously used.

Ps  Amazon have settled the claim in full including postage costs before the date they promised and the money has already gone back onto the credit card, which was lucky as my car needed work to the brakes in order to pass its MOT.  With the weather threatening and some long journeys looming over Christmas my brakes needed to be safe.

No 1 Son has not been forgotten; I have already ordered him a bridge style camera for him to use and learn on, including memory card and case.  I am not sure my feedback will be quite as fantastic as the photos we are expecting from No 1 Son