We moved from Devon 6 years ago this November and only fleetingly have gone back to visit.  Initially we did go back briefly to stay with my mother, refusing to visit any old haunts or even see old friends.

It was a conscious decision at the time as the choice to move was not altogether a happy one.  We had been settled where we were, the boys at a school that seemed very much to match our needs despite the 15 minute drive each way.   I had my own business having been made redundant a couple of years earlier and Mini Son had just started nursery.   My mother was in the same village, a peaceful stroll away past the cemetery where my father now unfortunately resides, the children would always stop and visit his grave as we passed.  Birthdays and anniversaries would be marked by a few flowers often picked from the hedgerows as we walked.

Why would we ever wish to move you might say.

Sexy Sporty Dad had got a new job which was just over that feasible hour’s commute. He got his new job the day the builders moved in to build the fantastic new extension we had been working to get for the previous 7 years.    It took three months before he actually had to move, so he would return each evening to yet more chaos as they built the foundations and blocked the garden.   My business was just taking off and timings really couldn’t have been worse.

Once his new job began, Sexy Sporty Dad left us each week, renting a spacious flat, yards from his office which he stayed in all week.  We visited during school holidays when he still had to work.  I have many friends, braver than me who go through this every week, it is not unusual particularly in these days of recession, but for us it was difficult.  Three boys growing up needed their father’s presence to guide and reassure them.  I had terrific support from friends and family while I was on my own but I too missed him and the half hour phone call each evening, shared with the boys did not really compensate.

The final straw came when Middle Son was run over and leaving the other two with neighbours, I was blue lighting down the motorway in an ambulance and I had to ring him mid week and ask him to drive down to Devon not knowing if Middle Son would make it.  Thankfully Middle Son did make it, escaping with a fractured skull and cracked hip.  That was September, 9 months after he had left.

By November we had let the house with it’s fantastic new extension and my own designed kitchen to die for.  We bought a new house on an estate with a primary school next door.  The boys had their greatest wish, they could walk to school and not have to drive each day.  The irony now is that they have a 15 minute walk up to the top school and they try all kinds of persuasion, urging and subterfuge to persuade us to drive them the half mile or so up the road.

It has taken a long time to go back and face our past.  My mother moved about two years after us to a village close to both my sisters and nearer us than she was in Devon, which negated the need to return regularly.

With the school half term upon us and my brother having just moved back to Devon, to the next door village, it was time to return and check out old haunts.  On our way down we took the boys into Exeter.  We were about to show them the old maternity hospital that saw all three of them born over the years.  No longer a hospital; a brand new Waitrose had opened its doors to the public apparently within the last month.    It triggered many hilarious jokes of giving birth in the aisles of the supermarket, and the quality of Waitrose producing strapping young men, not to mention questioning their returns policy.

We also drove them past the hotel where we had celebrated our wedding reception, the colours and feel of autumn similar to that day so many years and so many lost friends and family ago.  Then taking the longer route managed to meander up through the village and past the tiny cottage where following his birth No 1 Son came home for his first six months on this planet.   Poignantly we visited my father’s grave 9 years to the date of his death.  Mini Son watered the plants on his grave, 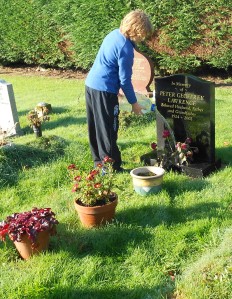 he doesn't even remember him

despite having never really knowing his grandfather.  His older brothers commenting on the number of new graves and the baby boy, who had been in our thoughts many a time, buried behind Gramps still has constant fresh flowers even after all this time.

My brother has moved to a wonderful old house where he will spend probably the next 30 years doing it up, and like the Forth Bridge will require starting again before it is finished.   There is now central heating to top up the rayburn and woodburners that circulate warmth around the thick cobbed walls.

Narrow passageways lead through the house to uneven walls and non regular rooms.  Original beams on the ceilings so low, that my boys now have to stoop to save their heads from being hit. The large enclosed and fabulous garden full of apple trees, climbing trees and a huge kitchen garden where they plan to grow all manner of vegetables and fruit.   Hidden beneath the overgrown hedges we found sheds and fruit cages, a bird house above a stone bird table and in the middle of the garden the pond with a tiny stone bridge over just begging for a fishing knome to dangle his rod.   They are going to have their work cut out but they will have a great project for years to come.

We finally plucked up courage to go back to our old house, well to the road we use to live in.  We called in on our next door neighbour for coffee and realised her baby was now a boistrous 8 year old with a mind and life of his own.   She suggested we knocked on the door and have a look around the old house.  Not that brave yet we but noticed the new windows and checked up on all the other neighbours and what they were doing now.

We moved round the corner to great friends of ours and were met by their youngest child. It was only yesterday had he started nursery; when I first met his mother, he and No 1 Son were just a few months apart and attending the same nursery at the school 15 minutes away.  He has now left top school and travels each day to college to do his A-levels.  He too is taller than me and his sister who was not home is away at University no longer in her second year of top school as she was when we left .  Where did the time go?

I know we have kept in touch and commented on what our children have been doing, over the years.  Meeting occasionally when work commitments brought her within spitting distance, but it is only the visible sight of the children that makes you realise that they are no longer the tiny people we left behind.  They, like us have grown up and got on with their lives and there is no way of catching up on that lost time.

Well NANOWRIMO is upon us all too quickly and as threatened I have again fallen under its spell.  I have committed myself to trying; even if this does not succeed I will be able to say I have tried.  Writing a novel is quite scary anytime but to do it within the tight time frame of a month is probably as Sexy Sporty Dad has commented complete madness.   He has been very supportive so far asking how it is going and how many words so far.

Delighted with his new found interest in my writing, although I believe it is more in keeping with the idea that he wants 50,000 words to be written quickly and be out of the way, rather than interest in the actual story.  I will however treasure the fleeting interest I might receive from him for as long as it takes and if I can produce a half decent novel at the end then all the better.

I also write this with thoughts and prayers for all those affected by the horrendous M5 crash.

This entry was posted in Family, Writing and tagged Devon village, Family, Forth Bridge, NANOWRIMO. Bookmark the permalink.

One Response to "Time Passing"