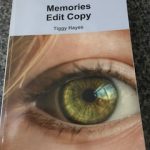 I don’t even know where to begin…

2017 is done and maybe for the best.  There were many things that happened to me over the year but the one that will always be connected to that year will be the death of my mother.   I find that I struggle to take her out of the equation.  I was very wrapped up in her life and she in mine the older and more dependent she became.

My writing suffered badly particularly towards the end of the year.  That wasn’t all her fault or my reaction to her death but it started soon after Swanwick in August.  I came back full of inspiration and eager to build on the confidence gained both from attending the writing school and having been to Winchester Literary Festival earlier in the year.

As my mother deteriorated and went into hospital I spent weeks driving back and forward to hospital most days.  Juggling work, understanding bosses and getting very little sleep; writing became a distant dream. The fortnight after she died was a whirlwind of limbo.  Emotions stopped, autonomy kicked in and my body went on to autopilot, I ate because I had to produce food for others but there was no taste, no passion in the preparation, just functional.   I breathed because my body needed no input from me.  All real thought processes closed down, blocking any insight to my mind or heart.

The funeral was an ordeal, now head of the family it was up to me to lead the proceedings.   Not that anyone but me had that expectation.  Duty and family positioning is however, ingrained in the makeup of personality.   I have attended funerals in the past but never taken any notice of etiquette, order or ceremony.  This was up to me and as such with sibling help we did it how she wanted.  I know that because she had left copious notes with detailed instructions and she had gone through it with me so many times even as I determined that she would outlive us all.

Finally, that part was over and two days later, I was able to relax on board a cruise liner.  The holiday of a lifetime; years I had been building up to this and now it was here.  Like a coiled spring I walked onto the ship. My back, neck and all manner of limbs that I knew of, and ones I didn’t, wound so tight each step ached with pain and a deep longing to sleep forever.

For me, writing is a deep exposure of myself, my innermost thoughts and often feelings.   That is not to say all my novels are about me, but there are elements of my beliefs and hopes in each protagonist. My fears and hates wrap themselves tightly into the package of my antagonist and the journey of the story reflects my inner search to discover my part in the battle of good and evil.

I joined the cruise writing group, in a way it was an automatic response.   I had been planning to regale the small group with lots of anecdotes and stories of my favourite writing school or the trial of editing a book.  Instead I stayed quiet, not even sure I had the appetite to expose my words, let alone feelings to the world or a small intimate group of writing novices.  I hid in the corner where the first exercise ‘to write of someone in your past who meant a lot to you but is no longer with you’ caused more than its fair share of writers’ block as a crescendo of emotions crashed into my pen causing it to stop inscribing the letters.

I stuck with the group, quietly in my own world I tried the exercises, pretending to be a novice and scared to vocalise anything.  Some spark went deeper; overcoming the blank page. Back in the privacy of my cabin, Sexy Sporty Dad away at the gym or swimming pool, I tried more of the exercises.  By the return home, I had a collection of written mementos of the trip and rather than read them out, I emailed them to our tutor.   Weeks later a mail arrived in my inbox with a collation of the group’s writings set to pictures of the trip.  I was back in print.

Even in grief there is a cathartic component about writing and having started again I was not going to stop.  November arrived so quickly bringing in NANOWRIMO along with a long-awaited operation.  The letter waiting for me on my return from the cruise.   Timing could not be better four weeks of recuperation while I tried my hand at 50,000 words what could be easier.

I found it very difficult this year to concentrate on the story, my mind wandered and emotions erupted cascading down into a melting pot of contrasts.   I had time, but couldn’t focus.  I had a story plan but there were too many similarities to my life, real and imagined that were too raw to write.  My laptop constantly by my side but in too much pain to sit for long periods.   I did it, by some miracle I did manage only on the last day to pick up the additional word count, but I finished.   ‘Bucket List’ now joins ‘Destination’, ‘Mans’ World’ and ‘Scrum Down’ in my bottom draw waiting.  All quirky and basic, needing a lot of magic to transform them into novels but they are ready for when I am.

December came and went in a blur, as it always does.   A lot of build up and fractiousness beforehand and then it was over in a blur.  I am not sure how much I really felt or remember.  As a family we again all did our bit for the Community Christmas meal and returned home nourished by a peace and inner warmth that we had given something special back.  Our Christmas tree was still surrounded with presents and I managed to see my siblings, Sexy Sporty Dad’s family and my mother’s remaining family over the period.

January; I have woken up to a determination, raw and hungry.  I want this book out there.  ‘Memories’ has been too long in the writing and editing stages it is time to move on and produce it.   A good friend of mine who has many books to his name, produced his current work in progress as an edit copy paperback.  He finds it easier to read a book than a tablet or laptop.

I took his advice.  The thrill, anticipation and excitement that bubbled over as I opened the package was a moment I want to savour forever.  There is only one way to feel like that again and that is to get on and publish.  So back to the book for me then.

2018, I hope is the year that Tiggy Hayes makes her debut into the world of publishers and a whole new scary journey.

This entry was posted in Family, Writing. Bookmark the permalink.
Click here to cancel reply.