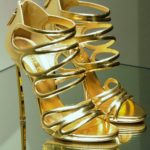 She entered the room last, everybody turned to stare.  Her dress down to her ankles clung so tight to her slim body, it revealed nothing underneath.   It clung snakelike as she moved, the colours shimmering and catching in the light.   Rich colours, golds, reds, oranges all blending in shell like patterns; sprinkling of blues and greens softening the brightness.

She appeared tall, taller than most until your eyes could be torn away from the mesmerising fire red hair tumbling down her back in rivulets of semi-curl.   She walked with confidence and ease on the high single pin stilettos.   Gold with hints of red and orange. Straps of delicateness holding them seemingly in place.

Difficult to imagine then, the next time I would notice those shoes, they would be embedded in the large lifeless chest of Count Dergo.